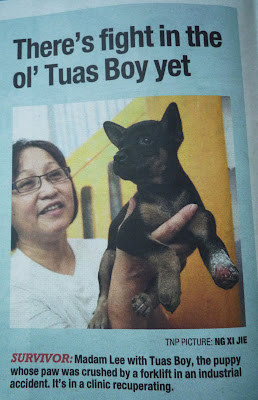 IT doesn’t take long for a visitor to see what’s wrong with Tuas Boy, a two-month-old mongrel.

Where there was a paw is now a reddish, swollen stump, covered in white antibiotic powder.

The victim of an industrial accident, it had its front foot run over by a forklift on 5 June.

Frantic workers at the factory were forced to saw away its paw to save the dog. Tuas Boy is now recovering at Pet Clinic, off Serangoon Garden Way.

Madam Lee Siew Ying, 56, a clinic administrator who is helping to care for the dog, said the stump is not bandaged because the pup likes to dip it in water.

‘This was probably how it dealt with its pain in the days it was at the factory,’ she said.

Despite its trauma, Tuas Boy has lost none of its puppy playfulness, licking Madam Lee’s face and pawing at her white shirt (with his good paws), during the interview with The New Paper on Sunday.

Madam Lee found out about the dog when a young woman wrote to her pet adoption blog, mettacats.blogspot.com, on Tuesday.

‘The webmaster called me and asked if I still had any energy to help,’ she said.

Madam Lee said the Tuas factory where the accident took place was the workplace of the email writer’s father.

But when Madam Lee got one of her volunteers to go with the girl to retrieve the dog from the factory, they found him locked in a container.

It was only the next morning that they managed to send the puppy – now named Tuas Boy – to Pet Clinic.

‘I was worried about gangrene and maggots,’ she said.

This is just one of many rescues that Madam Lee has undertaken. She runs Metta Cattery in Pasir Ris.

It is part animal shelter, part cattery. Each month, her expenses come up to about $6,500.

She covers the rental with her salary (she lives in a three-room flat with her husband and son), and accepts food and donations from people who lodge cats there.

It is not known yet how much Tuas Boy’s treatment will cost. How will Madam Lee pay the medical bill when it arrives?

One way is to get donors to write cheques directly to the vet. And if that’s not enough?

‘We ask if we can pay by instalments,’ she said.