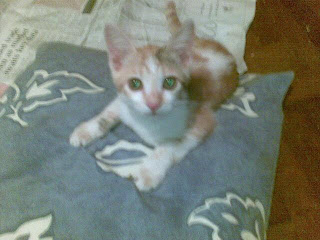 From SY,
“Sometime early July, a female kitten was sent to the SPCA by a lady called Julia from Blk 4** AMK.

While Julia was at the counter, surrending the kitten, she realised that there were notices displayed at the reception area that stated that animals brought to the SPCA may be put down within 24 hours .

On second thoughts, she took a cab and brought the kitten home.

Thereafter Julia contacted me and told me the whole incident. I agreed to collect the kitten from her that night.

The kitten was very defensive and kept hissing so Julia used a Sunkist fruit box to “cage” her in. That’s why I named her Sunkist 🙂

That night I left the office after midnight, after dropping off my colleagues, and got to AMK just passed midnight. Sunkist was about 3-month-old then.

I asked Julia to pay for the vaccination and sterilisation. She did.

Sunkist is the one cleaning Jiu-Jiu‘s ears and face every now and then :)”