Two Cats Trapped on a Tree

Two cats were trapped on a tree at a level of 3rd storey next to block 54 of New Upper Changi Road. SPCA rescue-team responded to a public call and managed to take one down on 6th January (Wednesday). However the caregiver there was not aware by then and so the cat was released back onto the neighbourhood. The caregiver came to know about the second cat still trapped on the tree. Repeated rescues failed and “alamak” the rescued cat ran up again.
The town council’s property officer was informed and he was wondering how to help.

A media was informed, hoping that publicity would get the fire brigade to help.

Fortunately by the late afternoon of 8th January (Friday), with the help of a contract worker, the SPCA team managed to get both cats down but one ran off.

Siew Ying took out the cat from the SPCA on 9th January (Saturday) and aptly named him TARZAN.

The caregiver there is on the lookout for the escaped cat. Hopefully it won’t run up another tree.

These cats are victims of abandonment as fear drove them up the tree!

May irresponsible cat owners be aware of the sufferings caused to abandoned cats and kittens and the trouble given to people who are concerned about the welfare of cats.

Please keep your cats indoor by cat-proofing your home.

Please send your cats for sterilisation.

Do not adopt a cat because it is cute or some pedigree!

Adopt because you are able to give this cat a safer home than being homeless, to care for in health and in SICKNESS.

Persian, Ragdoll, BSH or any other “branded” cat, like any cat, will be sick, grow old and will die. 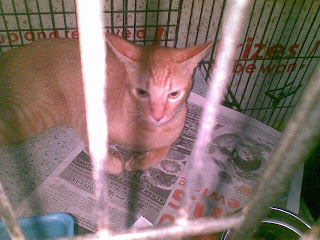 “Human friendly; allowed to be touched but camera shy 🙂 Just applied Revolution on him.”

Tarzan is likely to be a sterilised home-cat that was abandoned. Estimated age is less than a year.

According to the caregiver, the other cat that ran off after the rescue used to belong to a Malay family in Blk 78 – not neutered, lighter ginger colour girl and younger. Hopefully this ginger can be found and brought for neutering and rehoming to a responsible family.