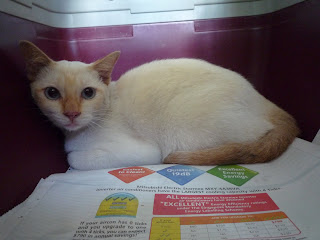 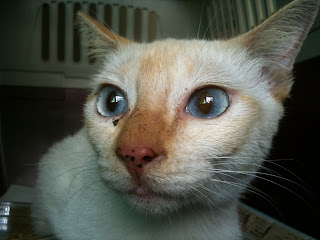 Background: Discovered under a car in a HDB car park by an Indonesian domestic helper called Nur on the morning of 29-03-2010. Despite being hurt with injuries on his fore-limbs, he allowed Nur to lure him from under the car, carry him some few metres to lower into a carrier.

Currently admitted into the vet clinic for observation of a limb of the left front limb.

If you would like to visit him with view of giving him a good safe home for the rest of his life, or to sponsor the cost of his vet care, please contact us.

15th August 2010
Paula Loh To all my friends in FB, I want to introduce to you to my new baby blue eye girl, Terez, whom I adopted from Metta Cats. She came home with me from Acacia Vet Clinic on 14th Aug 2010 after her sterilization. Hence you can see that part of her belly had been shaved. I so much want to bathe and clean her up when I took her home but the vet, Dr Kong advised me to wait a week for her wound to dry up. Anyway I don’t want to rush things to scare her for today. So I let her warm up to me at her own pace. 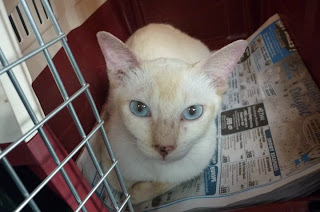 She was a bit apprehensive at first, esp the first few hours. She didn’t want to get out from the Cat carrier when she got home so I place it inside her large cage together with her litter tray and food/water tray.
By late evening I managed to coax her out from the cat carrier by talking to her softly and she daintlily tip-toed out of the cage and on to my lap!!

She got plenty of chin rubs and patting from me, and she craved for more by following me when I walked away to get my camera. However she didn’t dare leave the room and remain near the doorway. As soon as I came back. she rushed to my side and demanded more rubs. I could really spoil her, she is a darling!

Then to my delight, she went to her food tray and began eating right before of my eyes! I’m so happy. She seems relaxed and contented.

I want to Thank you both very much for giving me this sweet darling. I love her so much already. 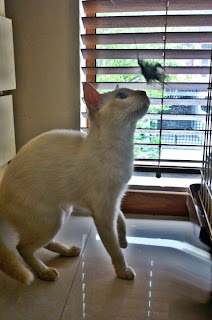 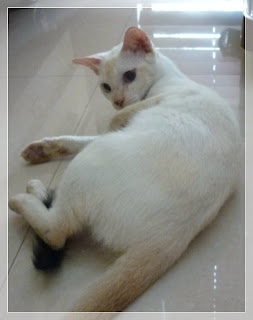 “Playing ‘Catch’ with a black feather.’

22nd August 2010,Paula Loh:
Yup, last Saturday was exactly a week since Terez’s home coming and it was time for her first bath. The fur around the tummy region still looks shaven, but the small wound has completely healed.

Luckily for me, I have an enclosed shower are…a so Terez could not escape me as I bathe her. Understandably, I gave her a warm bath with gentle scrubbing of No-tear cat shampoo with a mild scent. She did struggle a bit but she was rather scared and meowed loudly. So I hasten the process to lessen her stress…. no she didn’t pant.

I wanted so much to take pictures of her while bathing but it wasn’t possible without help. Anyway, I soon got her rinsed and grabbed a towel to soak up the water from her coat. She was meowing again in protest as if feeling undignified. Haa!.. haa!…. Then I got another clean towel to rub her dry. This was probably the only part she enjoyed. She remained standing on the spot to let me towel her dry.

Next came the ear cleaning. Well, she reacted by giving off some kind of a low grumbling. She did allow me to clean the first time without protest but this time, she was clearly not happy, but I persevered, and explained to her why she had to have her ears cleaned, just like a little child. Then, I let her off, to which she took to the task of grooming herself meticulously.

I have to remark that she did have a hint of scent during the first week prior to her bath, but it was kind of pleasant in a way.

So about an hour later when I walked into the room to check on her, she was resting inside an empty bookshelf and came down to greet me, looking so clean and smelling fresh. Soon, it was time to give her a collar with a tiny bell attached. It is quite crucial to know her whereabouts even within the house cause there are numerous rooms plus nooks and corners to hide, so wearing a bell collar is helpful in locating her since she is now more adventurous and likes to go exploring like Christopher Columbus!