From MettaCattery’s archives: Story of Boy-Boy 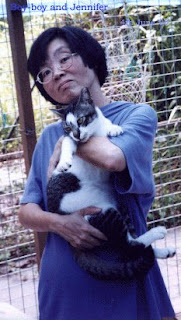 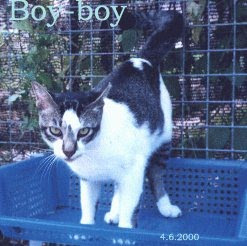 Lor 26 of Geylang : A year ago, a pair of kittens were seen by the side of the drain. Later, one disappeared. The remaining kitten was called Boy-boy. He grew into a very affectionate and trusting cat. He was often chased by an older tom, the “king” the territory but Boy-boy always outwitted him with his agility by running into the drain where he was born. With the help of Jenny, Boy-boy was “captured” on the 15th of May and sent to Namly Animal Clinic for neutering. He was released back to Lor. 26 on the 17th of May.
He was no where to be found on the 22nd of May. Fearing his safety from the constant harrassment by the older male cat, Jennifer decided to move Boy-boy to Metta Cattery and sponsor his stay there. 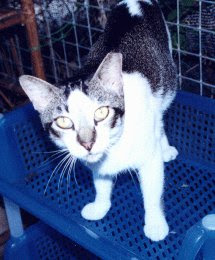 14th July 2000
Boy-boy was not his usual affectionate self. He seemed weak and his third eyelids were showing. He was seen by Dr. Ling of Namly Animal Clinic at 6.30pm. Boy-boy was found to have high fever and he was dehydrated. He was hospitalised.

16th July 2000
Sharon;-“I was later joined by stella, whom later noticed that something is missing – the licking of boy-boy! on that we went to check on him & noticed that he still doesn’t seem too well to me. Felt that his body temperature is pretty low, slightly dehydrated & shedding quite a fair bit of hair. on his low body temperature, think is not a good sign that his temperature appears to be fluctuating. Stella & I decided to give him some wet food but took only two small bites. He’s now isolated for closer attention”

17th & 18th July 2000
Boy-boy was still very sick. He was hospitalised in the Animal Clinic at Clementi. He was tested positive for FIP.

21st July 2000
Jennifer has this to say : “Sharon went down to Animal Clinic at about 3 pm and wanted to foot the bill. In the morning, she already called Dr. Ang to let her know that she was paying for the bill. I insisted on paying the balance and we were given 10% discount. Dr. Ang gave instruction which Jenny took note of them. We put the medication in the basket inside Boy-boy’s cubicle. Dr. Ang gave medication to help release the water in the stomach as well as multi-vitamins. Dr. Ang said be prepared for the worst in 3 weeks for full-blown FIP. If he has difficulty in breathing which means there is fluid in his lungs, we may have to release him of his sufferings. After handling Boy-boy we have to wash our hands up to the elbow with the medicated soap. Boy-boy is so gentle. He did not scratch me even though he did not like to be force-fed. He just clinged to me closer and turned his head towards me.”

23rd July 2000
Boy-boy seemed more settled in his own cubicle at the cattery. No more meows of protest as he did at the veterinary clinic as he was probably very uncomfortable with a drip, a small cage and strange faces. At the cattery today, he was very quiet but alert. He responded when he was called. Sharon patiently fed him wet food, fluid and medication. He was started on natural therapies which include Maitake mushroom extract, Olive Leaf Extract and Pcynogenol. Distant healing requests were answered by two Energy Practitioners, namely Tracy Hinschen and Pam Tanzey . Thanks Tracy and Pat!.

25th July 2000
Boy-boy was moved to a private residence for more intensive care by the ladies. He was started on Ensure which is a non-lactose liquid nutritional supplement.

26th July 2000
About 1 pm, he was let out of his cage which was 2 big wire-cages combined. He was sitting in the litter-bin. No poo but some urine noted. He got himself out of the cage and moved around weakly at the wash-area. He was fascinated by the drainage outlet. He kept poking his nose into the hole. Perhaps the outlet stirred in his weaken mind the days he spent wandering the drains Lor. 26, Geylang. About 10ml of Ensure was syringe into his mouth. A capsule of Olive Leaf Extract and 1/4 tablet were popped into his mouth. He seemed to be breathing heavier than yesterday.

About 7.30pm.
Jennifer has this to say : “When I arrived at Eastvale, Boy-boy was inside the litter bin. He peed a little. I opened Boy-boy’s cage door and called him to come out. He came out, settled down outside the cage, then went to settle down near the gully hole. I said prayers to him. After that I went to dining room and he walked to dining room and settled down at a corner. I said prayers again. Jenny arrived later. She cut Boy-boy’s nails without any protest from him. Jenny found a little bit of stool stuck to his anus. We then fed him 30ml Ensure and some wet food. We stopped for 15mins before giving him another round of wet food and 1/4 tablet lasix. Jenny cleaned his neck with warm water to loosen the hardened hair. We then put him on the dining table and I applied Reiki on him while we chit-chatted. He kept very still and moved a little bit after some time. We left about 11.50p.m.

28th July 2000
Boy-boy expired sometime today. He was found cold and stiff in the litter-box at about 5 pm. About half an hour of prayers were said for him, after which we were surprised to find his body warm and soft. We laid him to rest in a quiet spot under trees by a river. May he find happiness in the next existence.
*Jennifer* *Jenny* *Anthony* *cw* 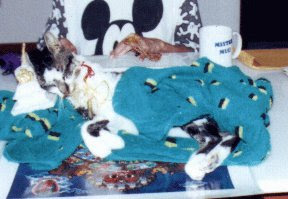 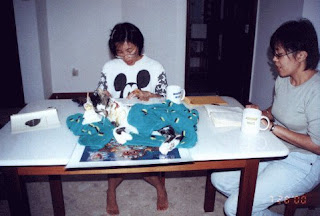 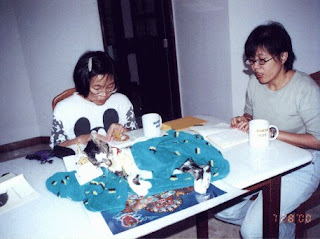 Channelers:-
Ginger Nolan, Pat Rice, MaryEllen Bramble, Andrea Golden and Pat Anderson
10th August 2000
“Ok…Boy Boy. We asked for information and we got the following: “He came back”, someone channelled “Everything responds to love” and also “He came back but he wants you to know he likes where he is”. Sometimes we get channeling, pictures, words and phrases and then discuss—but mainly the thing is that all the love you showed through the prayers and the amulets…he came back and showed you that he was there and recognized your love.—as they say, everything responds to love. I think this is something that you can share with your friends that the love you show is recognized by the souls of the animals too. So, boy2 has given you proof of that and I think it is something that you all can treasure. Boy2 gave you a gift.”
“In our beliefs, the animals go to that place you call ‘pureworld’ or whatever. I also have had most of my animals come to me in my sessions and they are in that happy place on the other side. But, regardless of when they get there—both Boy2 and Oreo are in a caring and loving place and they are happy.”

Lit me a light,
Kindled and delights
Holding me close
As I tread into
The night.

Farewell days
Farewell pains
Memories of the streets
To remain
Where once I used to
Check out the
Drains.

But no more
And pinned not
As ‘lorongs’ and ‘lorongs’
Of curiousity
Lead on..

Grateful for my lot
All that life had brought
From the aid of angels
I had sought:

Earth I walked,
A time and ago