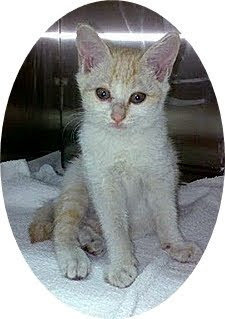 “It was a rainy 1 sep 2010 afternoon, I was at work when I received a call from my brother that he received a distress call from a friend of his who had spotted an injured 3 month old kitten at the void deck of a block near our estate. Feeling worried, my brother went down to have a look and found that the kitten had problems with both her hind legs and could not walk or balance well. My brother called me again and described her condition and I told him its best to bring her to the vet to see how bad the injury was and it was not safe to leave her there. He named her Hurairah meaning Cat when she was admitted at Joyous Vet on that same day.

The doctor told him that Hurairah’s hind legs were both very weak, it could be due to a fall..but there were no fracture. She was put on strong medications at Joyous to build the strength on both her hind legs. During her stay at joyous we noticed something odd in her behaviour as she is not as playful as other kittens or responding well to sounds or movements. Vet suspects that she is blind or deaf probably..

After 3 weeks at Joyous, she is now capable of walking well but still a little slow in response when playing. That’s when I decided to write into Mettacats for help as I am not able to take her in myself. Siew Ying from Mettacats was kind enough to take Hurairah under her care on 25 September when she was discharged from Joyous. We also managed to get a sponsor to help Hurairah’s further treatment for acupuncture too.”