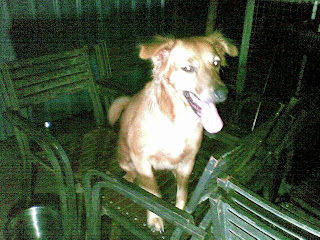 “Abbey – one of the 11 puppy that Tammy gave birth to. I am cleaning their area with a torch in the hand she thinks I am playing with her :)”

She said her boyfriend saw this very skinny mongrel at blk 300+ tampines. I think it was street 31.

The dog was there on the same spot for several days and some motorcyclists kept chasing her away, probably worried she might attack them.

She said she called 2 registered shelters both turned her down.

I got Mohan to help to bring her in that night.

We didn’t realise she was about to give birth. She was so skinny. We could actually count her ribs.

On 11th April near to midnight she gave birth to 4 puppies. Bee Lian n me witnessed that.

The next morning Sally called and said there were so many puppies in Tammy’s cubicle. At 1st she said 8, then said 10.

We really took very good care of Tammy and her puppies, 6 boys and 5 girls.

We managed to rehome 5 boys:)

We managed to sterilised all the remaining 6 plus Tammy with some help from ASD, Valerie and Rebecca.

This group of puppies are real rascals. They brought down the neighbour/breeder’s fencing and we spent almost 1 k to replace.

They are all healthy.