Background: 10-11-2009 – In the early hours of the morning, an abandoned kitten, hungry and cold, thought the warm engine compartment of a car parked in a HDB car park, was a safe place to seek refuge.

Fortunately his loud cries were heard.


SPCA was contacted and a rescue personnel arrived at the car park within an hour.
By then the engine compartment was silent. Has the kitten run off?

At 7pm, shrill kitty meowing was heard amidst the laughter of a group of kids aged about 8 to 10 years of age. A girl was carrying a kitten with a piece of cloth. They found this kitten on the tree just outside the car park. This must be the kitten hiding in the car’s engine compartment in the morning! 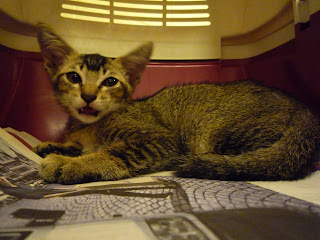 He was vaccinated at Pet Clinic by Dr Robin Au at about 9pm.

10-11-2009 The early morning was cold. Abandoned, lost and hungry, this tabby kitten sought the w 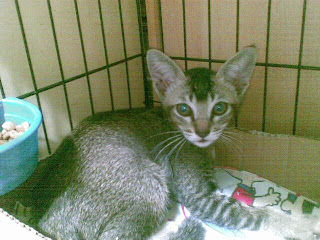 rong “refuge” of a warm car engine in a HDB car park.

Fortunately he has a loud voice despite being just a tiny 3-month kitty and his presence was noted. He ran off by the time the SPCA rescue man came. In the evening, he was found by a group of kids on a nearby tree.

Again his loud meowing was heard by a caregiver who was searching for his at about 7pm in the evening. Would the kids just “play” with him somewhere and then discard him again? The caregiver took the kitten from the kids, fed him some food and brought him to a vet for vaccination. He is now being fostered for a good home. He is totally comfortable in the presence of human beings, a sure sign that the he grew up in a human home but unceremoniously dumped!

14-11-2009: Fussie used the litter-bin from day 1 in the fosterer’s home. He took a long time to cover his poo, hence he was name “Fussie”! From yesterday, he decided to stop “scolding” the other fostered kittens and have started to play with them!