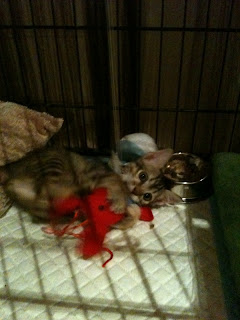 Just a summary about the 2 kittens..

Almost 3 weeks ago, we came across a kitten laying in front of a car at a car park.

As understood from the driver, there were 2 kittens sleeping in the rims of the car tires, when he unknowingly drove off..

One of the fall to the floor with the other was stuck in the rims upside down for about 1 1/2 hrs till few guys jacked off the wheels.

One of them (who was stuck in the rims) Nicha, is recovering well. She had a big part of her skin torn off, however the wound is healing very well now.

For her, we hope to put her up for adoption once she has recovered from her wound in maybe a weeks’ time. She has also had her first dose of vaccination & been dewormed.

For Rosy, (who was lying on the floor) the vet concluded that she has a head trauma. She was in terrible pain & her pupils were of a different size that nite.

The vet had managed to extract part of the fluid to help reduce the swelling & that helped. In the first 2 weeks, she had seizures sometime up to 4 times a day. After a seizure, she goes blind or faints for a while or sometimes it is so bad she springs out of her box.

I consulted with three vets already & they are of the opinion that I should put her to sleep. But I understand that seizures are not painful, though definitely uncomfortable but do not deserved to be put down. I would rather take her back from hospital but the vets did not think she will survive long. After each seizures, she needed life support of oxygen & injections to stop the seizure which seemed impossible to manage at home without any equipment nor experience.