Bernard closed his chapter as a St Bernard dog at 1.45pm

A member of Bernard’s ex-family visited him today.

Bernard had been unwell for some time and perhaps he was holding on to meet one of the people who was very much a part of his puppy-hood.

Mary Lim
i love you Bernard – by what karmic connection; i do not know but i do know we have a bond; a very special bond and i love you very, very much. Please walk bravely, no fear, protected by the Buddhas and dharma protectors, your angels. The short time we spent; the day we met – i will always remembered and cherished. Thank you for being a part of me and allowing me to be a part of you. You are special and you know we will always love you. Have a good rebirth, may we meet again.

Gowri Thamotharan You tugged my heart strings with those melting eyes of yours. I may not have touched you but you definitely did touch my soul. I was waiting to visit you sometime soon but its too late now. Rest In Peace Bernard. You will be greatly missed.

Mary-Anne Pan It really makes sense, and perhaps the owner would’ve learnt a valuable lesson at the last minute that he had made a mistake in abandoning Bernard. If he ever owns a dog again, I think he would be more matured in making the right decisions.

Betty Vong Jansen
Dear Bernard, It has been an honour and privilege to have known you. The last time I saw you, I kept seeing images of you running around in the sunshine in nature. Now I know what you were trying to tell me. Rest in peace, my dear friend. You have come to teach us lessons that we all need in our own lives. For that, I thank you. See you again, my gentle giant. Your spirit lives on in the lives you have touched. 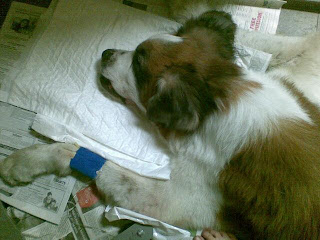 Just before he took his last breath 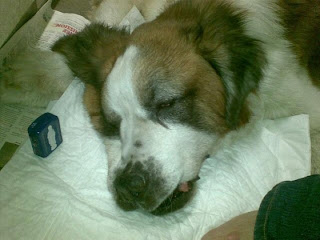 An hour after he passed away. 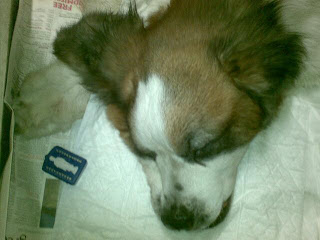 sms from SY:
“Arranged Cremation at 12 pm @ 80 seletar west farmway 5 spore 798061
(the animal resort) mohan n me will be at Acacia to prepare Bernard, 2
days ago alredy got the sandalwood powder ready, now going down to get
cotton cloth for wrapping. We treat him like one of us.”Bernard (a rescued St Bernard dog)

An Eulogy To A Dog
Faithful Friend

“The best friend man has in the world may turn against him and become his worst enemy.

His son, or his daughter, that he has reared with loving care may prove ungrateful.

Those who are nearest and dearest to us, those whom we trust with our happiness and good name may become traitors to their faith.

The money a man has he may lose. It flies away from him, perhaps when he needs it most.

A man’s reputation may be sacrificed in a moment of ill-considered action.

The people who are prone to fall on their knees when success is with us may be the first to throw the stone of malice when failure settles its cloud upon our head.

A man’s dog stands by him in prosperity and poverty, in health and in sickness.

He will sleep on the cold ground when the wintry winds blow and the snow drives fiercely, if only to be near his master’s side.

He will kiss the hand that has no food to offer, he will lick the wounds and sores that come in encounters with the roughness of the world.

He guards the sleep of his pauper master as if he were a prince.

When all other friends desert, he remains.

When riches take wing, and reputation falls to pieces, he is as constant in his love as the sun in its journey through the heavens.

If fortune dries his master forth, an outcast in the world, friendless and homeless, the faithful dog asks no higher privilege that that of accompanying him against danger, to fight against his enemies.

And when that last scene comes, and death takes his master in its embrace and his body is laid away in the cold ground, no matter if all other friends pursue their way, there, by the graveside will the noble dog be found, his head between his paws, his eyes sad, but open in alert watchfulness, faithful, and true, even in death.”

Senator Vest, speaking to a jury about Old Drum, shot in 1869.
George Graham Vest, a lawyer from Sedalia, Missouri who later became a U.S. Senator, gave this eulogy in response to a lawsuit on behalf of “Old Drum”, a foxhound who was viciously killed by a human neighbor. His owner brought suit for damages. When Mr. Vest concluded the case with this speech below, the courtroom was filled with tears. Old Drum’s master won this law suit.