No woris I hv d greatest pleasure in miting Bernard…

Love hurts once again … Fr looking at bernard pic … Once again I can feel his greatness of loving … In d pic I was actuali telling him tat he would be do handsome if he would be able to lift up his head n smile … Which he reali did!! Tat day when I was leaving he bark at me … I didn’t Noe he was trying to tell me something… Cos 4 days later I came to Noe he had pass when I was actuali suppose to visit on wed… Thou is love hurts me every time .. It hurts me in a gd way .. It hv made me stronger n devoted into helping others tat are in need… Tq Bernard … U will always be in my heart.. I love u ..

Hai, I’m Joe from KL, Malaysia. My blog is http://worldofcatndog.blogspot.com. I did follow your blog daily and came to know the Bernard story. I’m touched and hope that Bernard can teach us, human, a lesson.

I write to you is to inform you that I did re-post your posting on Bernard and hope that you can allow me to do so, so that more people can know about it.

Bernard was a Happy Dog

He lived in a house with a garden and was well loved. 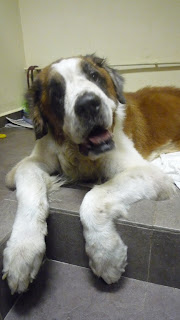 He had never heard of down-sizing until it happened.

His owners moved to a HDB flat and he was not on the approved-breed list.

He was farmed out to a commercial kennel for fostering and there his worst nightmare began.

A St Bernard, a dog bred for rescuing people lost in the large open spaces of the Swiss Alps, he lived the next five years in confined quarters in what must be for him a burning inferno.

In June this year, his owners could no longer pay his kennel fees and decided to put him down.

Bernard’s plight came to the attention of MettaCats which decided to give the arthritic 9-year dog the tender loving care which has been denied him for such a long time.

Volunteers with the expertise gave him massages and sponsors came forward to contribute to the purchase of a cart that would facilitate his mobility. 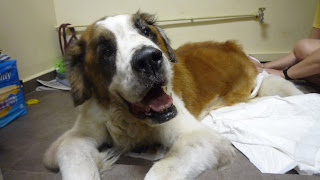 The years of neglect, however, took their toil even with the best of intentions and the most compassionate of love.

Bernard succumbed a month after being brought to MettaCats.

He remained man’s best friend right to the end.

He passed away only after a visit from his former owner.

He kept the faith, displaying right to the end the traits of gentleness and forbearance which would have made him a great rescue dog.

He touched the lives of many who came into contact with him at MetttaCats.

As one volunteer said, his greatest gift was in giving us lessons to learn from his life. He would not have lived in vain if all of us learnt these lessons well.